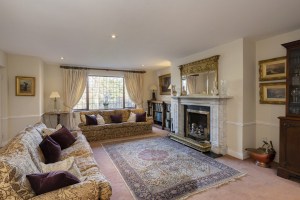 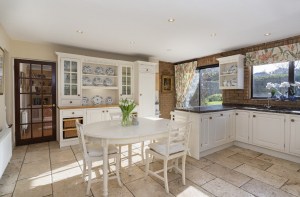 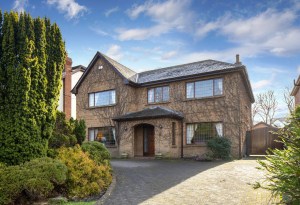 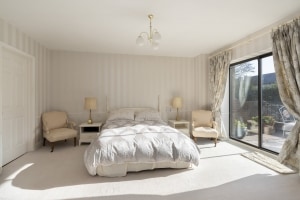 In medieval times the poor were required to wear the autumnal red brown hue of russet to designate their caste. But later Cromwell made russet a badge of honour when he declared: “I had rather have a plain, russet-coated captain that knows what he fights for and loves what he knows, than that which you call a gentleman and is nothing else.” His New Model Army came russet clad.

Soon afterwards in 1649, Malahide ran russet, when having sacked Drogheda, Cromwell and his rust coats marched down the Sea Road to besiege and took Malahide Castle from the Talbots. The family returned after the Restoration and managed to stay living there until 1973, making it the longest inhabited castle in Ireland.

In the heart of Malahide is a quiet cul de sac known as The Sycamores. And tucked away at the end of the road is Russett House, a 30-year-old detached family home named after the hue of brick it was built in (with an added ‘t’).

Russett House was the home of the late Michael Bell, the Dublin based fine arts specialist of note who passed away last year. Michael was well known in Irish art dealing circules and particularly renowned for his involvement with Irish produced artwork. Following his passing the property is being placed on the market.

A short walk away and you’re in the centre of the village, which is busy at the best of times, with locals going about their business and daytrippers dropping in for food or a pleasant walk.

Traffic is sometimes heavy and parking spaces are hard to come by, so interested buyers of the Russett, which has just been placed for sale at €1.8m, will appreciate the fact that all of the amenities are on their doorstep, with no need for village permits.

It would be the most ideal home for tennis lovers, with Grove Tennis Club located just over the back wall. The small, olde-worlde club has been here since 1959, when Kitty Hodges, founder of the Malahide Junior Lawn Tennis Club, went in search of a new site for children in the area to develop their skills.

Developer Pat Howard was in the middle of making plans for new houses on Grove Avenue when he heard about the plight, and agreed to set aside part of a field for the new club. The architect who was working on the development at the time, Tom O’Sullivan, then heard through the grapevine that Aer Lingus had a building that they no longer used, and so after a bit of negotiation, acquired it for the club, where is still stands today as the clubhouse.

Spoiled for choice, you can walk four minutes in the other direction before you reach Malahide Lawn Tennis and Croquet Club. Founded in 1879, it’s believed to be one of the oldest tennis clubs in Ireland. The club no longer has croquet facilities, but prides itself on its high standards and customs, which include more formal white attire during the summer months and a fair play code of conduct for the junior members.

Sandwiched between the two, Russett House was built about 30 years ago when sites were sold on The Sycamores to professional families who wanted to settle in the area. There are only six detached houses on the road, so it’s a rare chance to acquire one.

A wide and bright hall welcomes you into the home, with different rooms leading off in each direction. To the left is the formal living room. The large room is lit by spotlights in the ceiling and heated by an open fire that sits in a beautiful 200-year-old marble fireplace that was salvaged from an old country manor. To the right of the hall is a study or home office, which would also be a good spot for a teenage den or playroom.

At the back of the house is an informal sitting room with an open fire and double doors out the garden. The kitchen is beside this, so if new owners were looking to open up the back, a wall could very easily be knocked to make this a more modern space. The units in the kitchen are cream, hand-painted solid timber, and there is a sliding door out to the patio. A decent-sized utility, off the kitchen, is plumbed for a washing machine and dryer. A guest wc completes the living space on the ground floor.

Upstairs there are four double bedrooms. The master is definitely the star of the show with its balcony overlooking the rear garden and the tennis club beyond that. It also has an en suite bathroom. The main bathroom was recently renovated and now has marble walls and floor, and a large bath.

The attic has been converted and spans the length of the whole house so it’s a very big space. It would make a great room for older kids who want a bedroom with a study to the side.

Outside there is a garage that is wired for electricity and useful for extra storage.

The back garden is south-facing with a patio that steps up onto the lawn. St Oliver Plunkett’s and St Andrew’s national schools are both a few minutes’ walk away from the house.

On the doorstep is the Joanne Hill School of Irish Dancing, Malahide School of Music and the Young Gaiety Youth Theatre. And when the kids get a bit more independent, Malahide Dart Station is a 10-minute walk away with a regular service into the city.

Russett House in Malahide is on the market with a guide price of €1.8m through agents Gallagher Quigley.