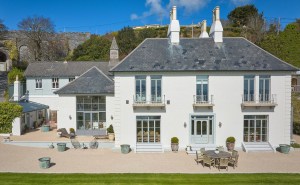 Three years ago, when the Sisters of Charity convent on the Baily in Howth came up for sale – having been in the nuns’ ownership for 125 years – there was speculation that interest would come from developers eyeing up the 7.3 acre coastal site to build several exclusive homes.

That didn’t happen. The Stella Maris convent did indeed sell quickly – a stretch of the Irish coastline, located on a prestigious road and a parcel of land with panoramic uninterrupted views over Dublin Bay is a rare opportunity – but the two parties that came together to buy it had different ideas. For one party – locals and historic property enthusiasts Nadia Pitt and Mack Lennon who have a long track record of buying period properties, moving in, renovating and selling them on – it was a chance to work on what was described in the sales details simply as “a Victorian house”.

In fact, the two-storey property built in 1859 and originally called Glenaveena House has been attributed to the practice of the most famous and influential architects operating in Ireland in the Victorian era, Deane, Son, & Woodward. It was commissioned for Lady Elizabeth St Lawrence (daughter of the Earl of Howth) and her philanthropist husband Sir Edward Borough. Not that that was easy to see at the time because ad hoc development on the site over many decades had seen the house surrounded by a vast prefab obscuring the sea views, a small church built in the 1920s, and a separate retreat house to the side.

The first step was to divide the site, with half going to the other party who intended knocking the retreat house and building a house. Pitt and Lennon kept Glenaveena House (450sq m or 4,840sq ft), the church (65sq m or 700sq ft) and some outbuildings on more than three acres of astonishing natural beauty with a front lawn and a vegetable garden as well as trees, shrubs and walkways (including across the public path down to the beach). 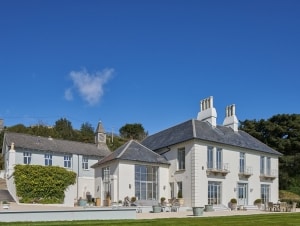 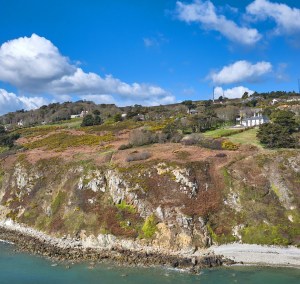 The house was originally villa-style, and characterised by a plain and pleasing symmetry, featuring shallow granite balconies and simple French windows, with the family accommodation upstairs, servants downstairs and the entrance via a porch on the north side of the property. That layout has changed. The couple have inverted it to make it work as a spacious family home and to take maximum advantage of the spectacular views. So there are now four en-suite bedrooms upstairs, the living rooms are downstairs and what was originally the servants’ entrance is now the front door, facing the expanse of the bay. 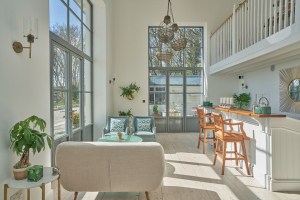 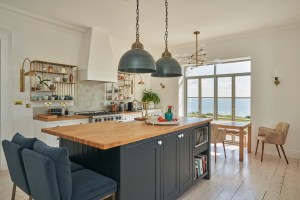 They didn’t extend in any way – indeed they removed some ugly add-ons – but their adaptation of a later two-storey extension to the side makes an enormous difference to how the house works. Now a double-height space with vast glazed panels and doors on two sides, it opens into the kitchen and is used as a family living area with a bar for entertaining, although it could be a formal dining room if new owners aren’t happy with the more relaxed eat-in arrangement in the kitchen. This room, which also has a tiny mezzanine opening to the upper floor, leads out to a sunny inner courtyard. Also at ground floor are two fine reception rooms off the wide bright hallway, as well as an office, utility, boot rooms and a cellar.

This new plan means two of the largest bedrooms are in what were originally grand reception rooms, with vaulted ceilings and sectioned French windows framing the sea views and opening on to the original balconies.

Up on this level there is still access via what was the original main entrance, a porch that with its lancet arches is a nod to the gothic style typical of Deane, Son, & Woodward. 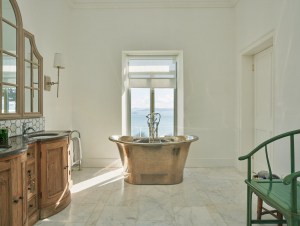 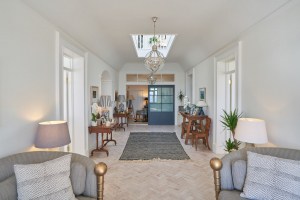 Pitt and Lennon are detail-oriented, scouring architectural salvage companies for missing doors, handles and tiles and the rest, but at the same time aren’t slaves to the home’s past. The spacious bathrooms, for example, with their mosaics, walk-in showers and freestanding baths, have the opulence of a five-star hotel.

They were determined that it would function as a comfortable contemporary family home, and the renovation included the installation of a water heat pump, zoned underfloor heating systems, and extensive insulation. The Ber is B3.

The presence of this cliffside home may be a surprise to many as it is hidden from view by a castellated limestone wall, a Great Northern Railway viaduct built to carry the Howth tram. Several local people will have been on the property to attend Mass in the small church. Not much work has been carried on here, and new owners could convert it into guest accommodation or perhaps a home office.

The house will share a portion of the driveway with the next-door property, on which work has not commenced, and so prospective buyers of Glenaveena will probably seek to establish what further screenings are to built on the boundary between the two properties.

Glenaveena House, on the Baily in Howth, is for sale through Gallagher Quigley and is asking €5.5 million. 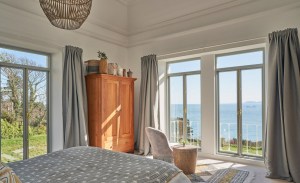 Centre Stage in Clontarf – how a home stager has enhanced the sales appeal...

Steel away to Howth – inside the €2.6m coastal villa once home to an...
Scroll to top