You are here: Home1 / News2 / uncategorised3 / Two Become One in Sutton – Supersized Penthouse 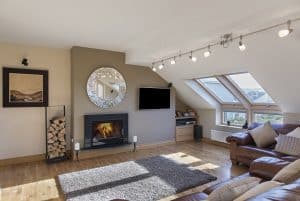 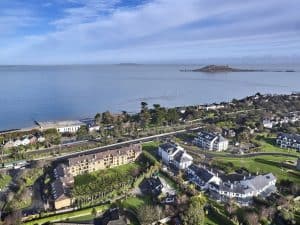 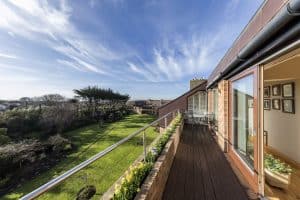 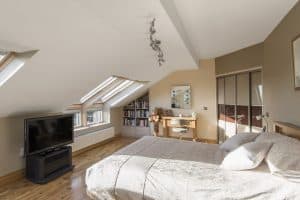 It may look like the ultimate bachelor pad now, but for the current owners, it was the lift that sold the penthouse apartment at Offington Manor to them. They had recently left a family home in the Offington estate next door and were looking for an apartment to which they could downsize with retirement in mind. And for future-proofing purposes, they wanted something with a lift.

The fact that No 41/42 was the only one in the Offington Manor development to have a lift – and that it was for the exclusive use of this one apartment – was too tempting a prospect to pass up.

The original owners of the property had purchased two adjacent units and combined them into one very large apartment when the Offington Manor development was first constructed back in the 1980s, but they hadn’t changed the interior much since then. So when the current owners bought numbers 41 and 42 in 2012, they set about a major refurbishment and redecoration programme, enlisting the help of Edward Brady Architects (EBA), now based in Baldoyle.

Out went the avocado bathroom suites and the warren of small rooms and in came smart, modern fittings, an open-plan layout, lots more light and a snazzy Kube kitchen kitted out with a range of Fisher & Paykel appliances, and an enormous island unit with plenty of storage.

The apartment got new heating, alarm and intercom systems, windows and doors, and Junckers oak floors. They even put in a new lift, dumping the one that had been there since the beginning and substituting it with a modern Kone Ennis replacement.

Five years later and premature plans for a quiet retirement have been abandoned in favour of an extended holiday in France, travel to far-flung places and visiting friends and relations around the world. So, No 41/42 is back on the market and bound to attract interest from those downsizing from larger houses in the area – and also from those who will view it as an excellent base from which to make the most of the leisure and recreational activities in the area (golf and sailing are big in these parts), while still being within easy commuting distance of the city centre, which lies 13km away.

With 2,200 sq ft of living space, the penthouse apartment is significantly more spacious than an average family home and the dual-aspect orientation ensures that there is plenty of natural light. On the south-facing side of the apartment, the views stretch all the way across from Deer Park – one of the summits on Howth Head, the lower reaches of which are occupied by Howth Golf Club – across Dublin Bay, all the way to the Wicklow Mountains, taking in the piers at Dún Laoghaire, and the Sugarloaf, as well as the Dublin Mountains.

At night, when the Spire in Dublin City Centre is illuminated, it too is visible.

To the north, the views are towards Portmarnock, Malahide and Portrane, and across the road, beyond the houses on Claremont Road, is Burrow beach, to which there is direct access via a walkway that runs under the Dart tracks.

Lambay Island and Ireland’s Eye are both visible and on a clear day, say the owners, there are glimpses of the Mourne and Coolea Mountains.

The open-plan kitchen/living/dining room spans the width of the building, and a Bodart & Gonay wood-burning stove, which the owners call “the BMW of wood-burning stoves” keeps things so toasty, they say they rarely need to turn on the central heating. After the refurbishment work, the energy rating of the penthouse improved from C3 to B2.

A separate, spacious utility room has a built-in hot press, while the boiler room provides more storage space, as does a dedicated storage room in the apartment and another downstairs behind the lift.

Extra storage is provided by the large double garage, which has an electric door and loft.

A guest lavatory and reading area with sliding doors out on to the balcony occupy what would have been the original entrance, midway along the length of the penthouse.

The balcony is cheery, with miniature daffodils planted along its length, and looks out over the award-winning communal gardens to which all the apartments in the development have access and which are beautifully planted and maintained.

Most of the apartments in Offington Manor are owner- occupied. Both the master bedroom and the second bedroom have large modern ensuite bathrooms fitted with Villeroy & Boch sanitary ware.

In the case of the master bedroom, this is accessed via the walk-in wardrobe, while the second bedroom has two sets of fitted wardrobes, also from Kube.

Equidistant between the Dart stations at Sutton and Howth, the nearest shops are in Sutton Cross, while Howth has a daily market opposite the station and offers a wide range of cafes and restaurants.