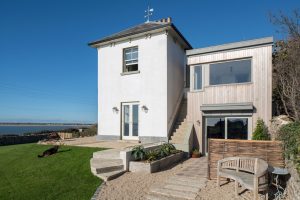 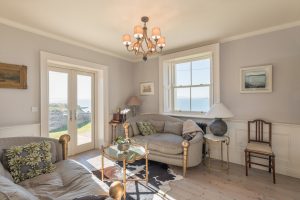 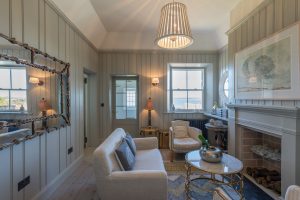 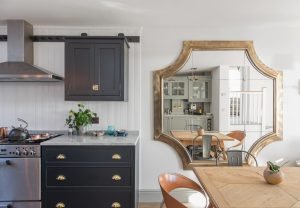 The Coastguard Station tucked away at the end of Sutton’s Strand Road is a rare find. Steeped in maritime history, the original terrace of low buildings is one of a number constructed by the British navy around Ireland in the 1850s to protect the Irish coastline. The current owners purchased the simple brick-faced cottage and adjoining two-storey whitewashed lookout tower with panoramic views of Dublin bay for €400,000 in 2014. After a tortuous planning process they extended to the rear and the result is a sympathetically constructed home filled with light, charm and discrete spaces.

Now on the market for €995,000 through Gallagher Quigley, the simple original structure has been cleverly transformed to incorporate three bedrooms, three-and-a-half bathrooms and three reception rooms. Owners Nadia and Mack Lennon have form in the home refurbishment space – Nadia is a house designer (she adds the aesthetic flourishes to an architects’ drawings) and Mack is a property manager. Prior to this project they had extensively restored a vast 1930s beachside property on nearby Burrow Road.

With 1 Martello Terrace – so named because the road winds towards the Sutton Martello Tower – the Lennons took on quite the refurb challenge. The previous owner had lived there for 82 years and little had changed at the property in that time. A prominent local figure and leading light of Sutton yacht club he had a passion for maritime history and had preserved the house in its original state almost like a museum piece, right down to the outdoor toilet.

The Lennons, with two growing daughters, needed to create a workable family home while adhering to the planning requirements for a protected property within an architectural conservation area. They spent many months figuring out how to make the space work in a contemporary and user-friendly way without sacrificing the building’s character. A priority was to centre the home on an open-plan living space but to ensure additional intimate reception rooms.

“A real downside to the current trend for ultra-modern open-plan spaces is that there are no rooms to withdraw into. Apart from being unable to hear because of activity in the kitchen or people going up and down stairs, there has to be somewhere to escape to,” says Mack.

A cedar-clad extension incorporating a wide galley kitchen provided the open-plan living space, but not before the Lennons had to build down a metre to ensure the roofline didn’t compromise that of the original house and a tiny outdoor cold room (much like a covered pub smoking area) was created off the kitchen to meet a planning requirement for a rear courtyard. The house has been cleverly reorientated with the main entrance now opening from the side through painted wood sliding doors into the open-plan space.

The craftsmanship throughout is exemplary, with much of it completed by the Victorian Salvage Co, and the overall effect is “nostalgic coastal” says Nadia, while Mark offers “bourgeois eclectic”. It now incorporates three reception rooms, three smart en suites and a downstairs toilet.

The interiors are impeccable – not a TV or Lego piece in sight – and snug rooms are made snugger with cast-iron fireplaces, wood panelling, Victorian window shutters and original reclaimed floorboards and doors. A muted Farrow & Ball-inspired colour palette creates a distinct maritime feel and where possible the Lennons have salvaged or featured what they can of the original property. An original window was retained in the small living room as a light source from the extension.

Off the living room (and the original cottage front porch) the first of the three double bedrooms steps down to an en suite that takes natural light through frosted double glass doors. A lightbox and built-in cupboard in this room were made from wooden fretwork and a pew rescued from the Anglican church on Clontarf’s Seafield Road.

The highlights of this house are all in the detail. Because of its limited size, concealed storage space is everywhere, even accommodating a bespoke walk-in closet off the main bedroom with its compelling sea views. Luxury finishes add polish, from the light fittings throughout to the bathroom marbles, mosaics and antique brassware. Cast-iron school house radiators and underfoor heating add to the cosiness.

Outside the rolling garden is set mainly to lawn with a gravelled driveway behind electric gates. Reclaimed granite and terracotta tiles were reused for the pavement and patio, while an old wheel pump has been restored as a garden feature.

The two rooms in the original tower have dual aspects, with the lower room arranged as a small but perfectly formed drawing room. In the double bedroom above, exposed rafters create a loft effect and with its working fireplace this room might find better use as a study or master bedroom.

Selling agent Conor Gallagher of Gallagher Quigley says celebrated Irish author Christopher Nolan at one point considered buying this property for its inspirational historic setting. Nolan instead lived for the latter part of his life with his parents in Red Rock located just across the road at the entrance to Howth’s scenic 9.5km Cliff Walk. Steps also lead down here to a pebble beach with a ruined boat house and slipway, where grey seals regularly come to bask.

The Lennons have probably spent as much again in number 1 Martello Terrace as the original purchase price. It’s not an obvious family home, but a unique perfectly formed haven for whoever falls in love with it. And someone will.

In Pictures: Swish extension is the cherry on top of this €1.3m dream home...
Scroll to top