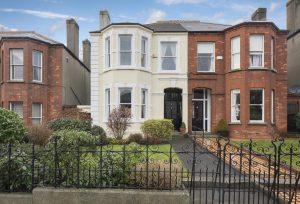 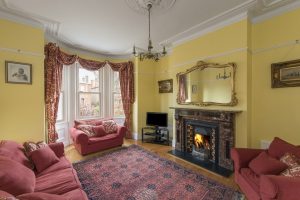 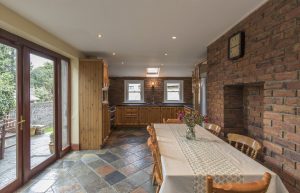 Render or stucco-fronted period homes are a big feature of the seafront suburbs of Dublin in areas like Dun Laoghaire, Blackrock, Sandycove and Clontarf. They lend a delicate iced pastel look given the preference of owners to paint them in creams, pale blues, pale pinks and other powdered hues.

But there was also a practical application for render on the waterfront as opposed to exposed red-brick, which was more typical in inland suburbs. Render served to better protect the structure of the house from damp and erosion caused by the caustic salted spray and harder rain which hits homes exposed to the sea.

Hollybrook Road in Clontarf was built circa 1900 and likely developed by the Vernon Estate. It runs perpendicular to the sea and right down to the waterfront. Judging by the largely red-brick homes that are in situ today, it seems most of the original owners thought they were sheltered enough to opt for brick fronts. But some obviously believed it was better to be safe than sorry and there is the very occasional “seaproofed” rendered home, which makes this street unusual.

Dating from the late Victorian era, 29 Hollybrook Road is one of the handful of rendered versions sitting between its red-brick counterparts and a few hundred yards from the sea.

With 2,044 sq ft of living space, there is the potential to extend, subject to planning permission. The 65ft-long west-facing back garden has old stone walls and a raised patio area and is of a decent size – there are all the signs that it has seen plenty of action as a mini-sports pitch. It gets the afternoon and evening sun.

New owners may wish to investigate the possibility of opening up the back of the house and building a modern, open-plan kitchen with easy access to the garden to make the most of balmy evenings and the sea air. The garden has a couple of brick-built sheds that house the boiler and are used for general storage.

There may also be the possibility of developing a mews building; as currently configured there is rear access from the lane that runs behind the garden and there’s parking for several cars. Some of the neighbouring houses have built mews houses, so there is precedent for similar development here, and others have constructed substantial modern extensions to the main house.

Off the entrance hall are the high-ceilinged drawing room and the dining room, linked by double doors, both with working fireplaces. The orientation means that these rooms get southerly and westerly light through the day.

The current owners purchased the house about 10 years ago, and set about re-wiring and re-plumbing. They restored the original period features – the house has decorative cornicing, picture rails and ceiling roses, original timber floorboards and ornate marble and cast-iron fireplaces in most rooms. The only dud note are the new double-glazed windows, which, although timber, are not good copies of the originals.

The slate-floored kitchen is to the back of the house and its pine units feel a bit dated, but could easily be given a new lease of life with a coat of paint. Some appliances are included in the sale.

As currently laid out, Number 29 has five bedrooms spread across three levels, the smallest is currently used as a study. Additionally, there is an attic space that is used as a den and teenage homework zone.

New owners may consider turning the small bedroom, which is adjacent to the master bedroom, into an en-suite bathroom. As it stands, the house has two family bathrooms, both of which are smart and modern.

Location-wise, Hollybrook Rd is convenient to the city centre, with College Green 4.5km away, making walking or cycling to work a realistic rather than unlikely possibility. Belgrove NS and Green Lanes Church of Ireland NS are the two local primary schools, while Holy Faith and Manor House are the girls’ secondary schools, and St. Paul’s the boys’. Mount Temple and Belvedere are also popular with Clontarf residents.

A DART feeder bus to Clontarf station operates from both ends of Hollybrook Road and there is a bus service into the city centre from Clontarf Road.

Clontarf Rugby Club has active junior and senior programmes and Westwood, with its pool, gym, and tennis facilities, is a great amenity for local families.

The seafront is thronged with walkers and joggers all year round, and nearby Dollymount Strand is where the local canine population likes to let off steam, in amongst the kite surfers and hardy swimmers.

The vendors like the area so much that they are building a new home on a site they’ve purchased here.

The Food Room on Clontarf Road and Nolan’s on Vernon Avenue are where neighbourhood gourmands pick up their shopping. Moloughney’s, also on Vernon Avenue, is where they head for dinner if they don’t feel like cooking (the early bird deal is excellent value).

Clontarf has an eclectic and growing cafe culture, and other popular local restaurants include Kinara Kitchen, Fishbone and Picasso.

The Saturday farmers’ market in St. Anne’s Park is well supported, as are Olive’s Tearooms named after Lady Olive Ardilaun (Guinness). The kitchen uses vegetables grown in its own allotment to prepare a healthy and seasonal menu.

In Pictures: Swish extension is the cherry on top of this €1.3m dream home...