Drumleck House, which has 4 hectares of gardens, was built in the 1830s, then updated by every successive owner

By Miriam Mulcahy of the Irish Times 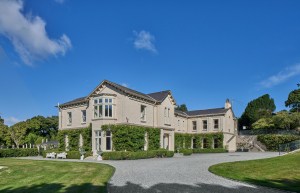 Drumleck House is the kind of property that invites superlatives. It’s also the kind of home that only rarely comes to market. The art dealers John and Gertrude Hunt lived here for 30 years, entertaining and hosting Jackie Kennedy, Elizabeth Arden and Peggy Rockefeller. And it’s obvious why their guests loved coming here: this little pocket of Howth can feel like a self-contained Eden, perched on a clifftop overlooking the world below but completely removed from it.

Laid out in a C shape, the entrance hall has a 26ft ceiling, Waterford Crystal chandelier and chequerboard floor. Two formal connected reception rooms to the left look over the lawn sweeping down to a rocky bluff that was dynamited by a previous owner for a better view of the sea. Next to the reception rooms is a west-facing dining room where you could easily entertain 20 people. 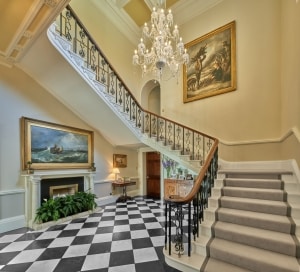 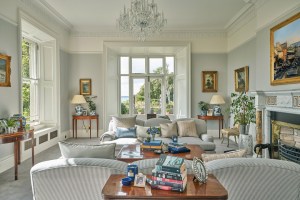 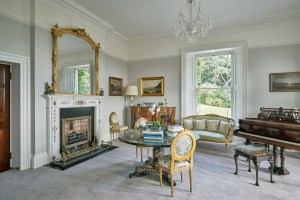 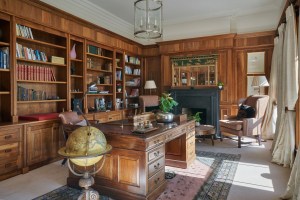 On the other side of the hall are a large kitchen with a cherry-red Aga and a breakfast room that looks through the garden, salvaged Georgian columns framing the Poolbeg chimneys, across Dublin Bay. Off the kitchen is a corridor to an outside two-storey building housing staff quarters, storage rooms and wine cellar.

At the end of this corridor is a huge room that was once the house kitchen and was then turned into a billiard room. It’s now a family room that teenagers could use during the day and adults retreat to at night.

A grand staircase divides the first floor into two distinct wings, which will appeal to lots of families. An enfilade of rooms makes up the principal suite; the large, airy bedroom, dressing suite and bathroom look south over the bay. Also on this wing are another large bedroom, with an en suite, and a pretty study with exquisite detailing, fabric-panelled walls and an arched window.

The northern wing has two more bedrooms, both en suite, and a big, masculine study that emanates master-of-the-universe vibes. A trio of windows overlooks the lawn and sea: one can imagine deals of the past and future being inked and shaken on here.

The gardens have outdoor and indoor swimming pools, a gym, playhouses, pavilions, a paddock with stables, a gardener’s cottage, a tennis court and gates opening out to the Howth cliff walk, with access to the Jameson swimming hole and a small stony beach. 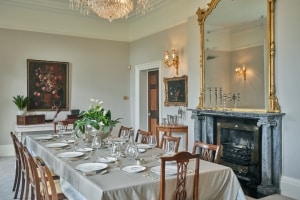 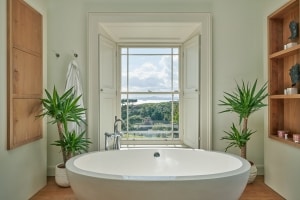 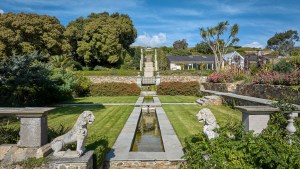 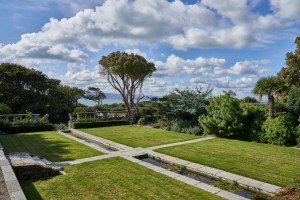 Beyond the gym and swimming pool, a pathway leads into a Victorian walled garden that is extensive but needs serious work. It is followed by a sequence of carefully planned spaces, with pools and ponds, unfolding to the edge of the clifftop. The formal, Italianate gardens then give way to more informal spaces, featuring roses, rhododendrons and ferns. Tropical plants thrive here; the Gardener points out flourishing Chilean jasmine, gum trees, agaves and echium.

You’ll spot follies like the pillars rescued from Georgian Dublin, sculptures, Chinese terracotta warriors, and a white garden modelled on Sissinghurst, which Gertrude Hunt visited. The path to the sea leads through an orchard with fruit cages, pecking chickens, lemon trees and a south-facing wall laden with ripened figs.

Drumleck House, which will require continued stewardship and futureproofing, is on the market through Gallagher Quigley with an asking price of €10 million. 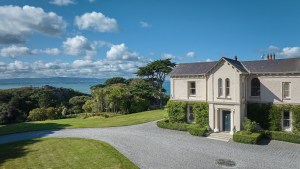 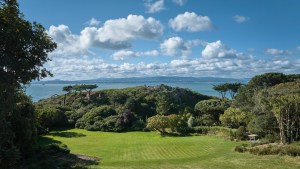 Steel away to Howth – inside the €2.6m coastal villa once home to an...