Sutton Castle, once the country home of the Jameson whiskey family, is perched on the cliffs of Sutton and set in seven and a half acres of magnificent gardens with strolling paths and water features, against a wooded hillside backdrop of mature trees. Now an upmarket apartment development, it’s a location that will appeal to purchasers in search of gracious living with none of the hassle of having to maintain a period home.

The house was commissioned by Andrew Jameson, a grandson of John Jameson who founded the famous distillery near Smithfield. He made the decision to decamp from his townhouse on Fitzwilliam Square for the fresh air of the southern slopes of the Howth Peninsula, and commissioned architect Alfred Darbyshire to design Sutton House, a 40-room Tudor-style mansion finally completed in 1895. The last Jameson to own the house was Harriet Kirkwood, Andrew’s daughter, a well-known artist.

In the 1970s, the house was converted into the Sutton Castle Hotel. The hotel closed its doors in 2001, and was developed into eight luxury apartments, and a further nine built in the new west wing.

Of the two apartments now being offered for sale by Gallagher Quigley, The Baily is in the main house, and Cedarview in the west wing. Both have, until recently, been rented out as corporate lets and are presented in immaculate condition.

Traces of the Jameson family remain in the main house, in the family coat of arms and the motto – Sine metu (“without fear”) – on the front of the house. The main staircase has been fully restored, with stags’ heads looking down over the stairwell. A lift has also been installed, which will be of interest to empty-nesters trading down with a view to being able to maintain their independence in the event of reduced mobility.

The Baily has 1,610sq ft of living space and is located on the first floor of the main house. The apartment incorporates one of the original living rooms of Sutton House, so positioned by Darbyshire to make the most of the views across Dublin Bay. That room is now the main living/dining space of the apartment and has dramatically high ceilings. It features original joinery and beautifully crafted windows, and opens out on to a small terrace that’s big enough for a table and a couple of chairs. The floors are in solid mahogany and a hand-carved Portuguese limestone fireplace is fitted with a gas fire.

The master has an en-suite shower room, and there is a separate bathroom.

Cedarview is a slightly smaller apartment, with 1,189sq ft of living space. It is wheelchair-accessible via a path that leads to a 345sq ft paved terrace facing south towards Dublin Bay.

Cedarview has a spacious entrance hall and a living/dining room that opens out on to the terrace. The kitchen is smart, but can be concealed behind sliding doors. It comes with fitted appliances and granite worktops. The master bedroom is en suite and there is a second bedroom with a guest shower room off the hall.

The nearest shops are at Sutton Cross, a five-minute drive away, and Howth is five minutes in the other direction.

Baily and Cedarview both come with two car-parking spaces. There is ample guest parking and a resident caretaker. 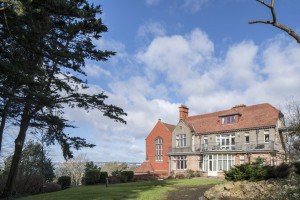 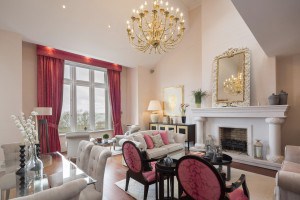 Ghost-Watching in Howth
Scroll to top