The Brady Bunch proved they’re still the world’s most popular blended family after HGTV recently united six of them with their old house for a hybrid reunion/home improvement show.

A Very Brady Renovation saw the now middle-aged Brady siblings band together to renovate the original family house at 11222 Dilling Street, Studio City, California. They recreated the original 1970s chic interiors, decor and layout created on the studio set for the series which filmed from 1969 to 1974.

HGTV had to spend $3.5 million to acquire the house, and the renovation was completed in May 2019. The series premièred on September 9 just before Covid 19 broke.

Unexpectedly it smashed viewing records and became the most successful show in HGTV’s history.

Those cutting edge 1970s interiors (Mr Brady was an architect) actually look pretty svelte and cool today. Notable exceptions include the Brady family bathroom (it had no toilet), the bizarre horse sculpture in the hall and the icky avocado-coloured kitchen appliances.

If Dublin has its very own Brady Bunch, it has to be the Cooke/Salveta bunch of Galtee Lodge on Asgard Road, high up on the Hill of Howth. 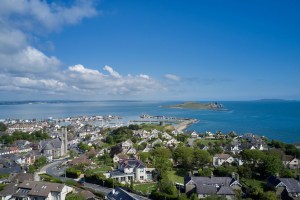 Having separated from previous partners, Darragh Cooke and Nina Salveta became an item in 2004 and later decided to move in together, along with her four boys and his two boys and one girl.

“Strangely, it was easier than any of us expected,” says Darragh. “Over all the years there’s been some low level squabbles here and there alright, but no one has ever had a full-blown row as far as we can remember.”

Nina adds: “In 2012 we were trying to renovate an estate home at Dungriffin Road to house nine of us. But it wasn’t working out. We had people sleeping in a converted garage and all that kind of thing. We were all on top of each other”

Darragh became aware of the perfect site coming to market through a friend of his: a half acre with amazing views on Asgard Road, but he needed to convince a reluctant Nina.“As soon as she got up there and saw those incredible views she was on board.” 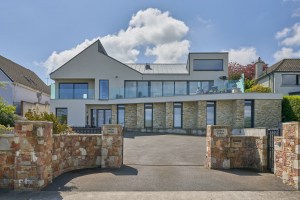 They purchased it and were at last in a position to design a home to cater for the needs of a big blended family with two adults, seven children (all teens or in their early 20s), two dogs and a cat, and Nina’s brother, who would be regularly staying over.

Architect David Craig of Dublin Design Studio was called in to design. “David basically asked us for a list of what we wanted,” says Darragh. “First was lots of natural light, then optimising that sea view. There was a debate over how many bedrooms we should have. We settled on six doubles. Finally, I wanted our bedroom far away from the boys and their noise. 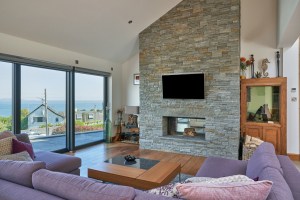 “So he gave us an upside down design with the main common living areas with our bedroom upstairs and most of the bedrooms and the games room/social room for the guys downstairs.”

When locals saw the plans for a 4,000 sq ft house, some objected because they thought the family was building a guesthouse by stealth. But permission came through and Darragh got started in February 2013. The bunch was able to move in by Christmas that year. 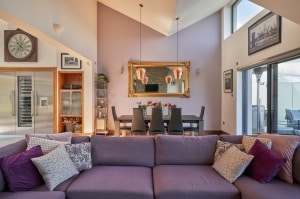 “This house has worked so well,” says Nina. “To the degree that if anyone on the Hill were missing a kid they’d ring here and ask if so-and-so happened to be here. Usually they would be.”

Darragh’s favourite part is the garden with its views over Howth Village, the Martello Tower and the sea. On a clear day the Mourne Mountains can be seen. It’s why Nina loves the balcony patio.

The house is A3 rated and costs “almost nothing” to heat with geothermal heat pumps and high insulation. From the entrance you’re into a big hall with a stylish floating staircase with panel backing that looks not unlike the famous Brady Bunch staircase. 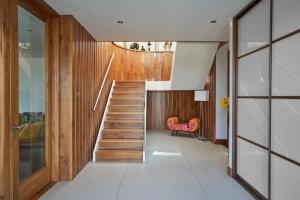 On the ground floor is the games, TV and social room for the teens. There are five double bedrooms with three bathrooms. Upstairs is the master bedroom, running front to back with its own ensuite and balcony looking over the sea. 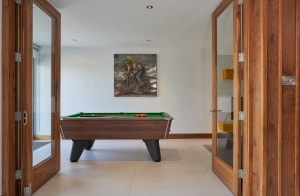 There’s a family room with a wood stove which also backs into the huge kitchen/living and dining room with floor to ceiling glazed doors. 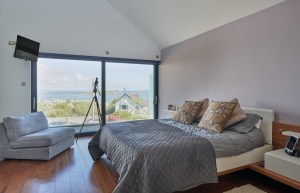 There’s a catering standard kitchen with three ovens and a simply vast L-shaped sofa that sits them all at once. The glazing opens completely onto a raised deck looking out to sea. 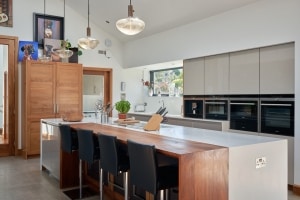 There’s a half acre site with a double height garage building which could make a home gym or office. 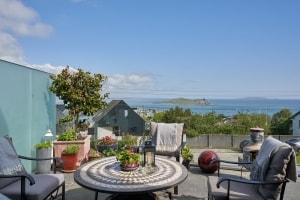 In the last year, four of the family have left home and two are on the way out So with the Cooke/Salveta Bunch splitting up, it’s time for Darragh and Nina to trade down to a more manageable home. Galtee Lodge costs €2.5m through Gallagher Quigley.

Sizeable and stylish Drumcondra Duplex for €725,000 has bespoke features including...
Scroll to top