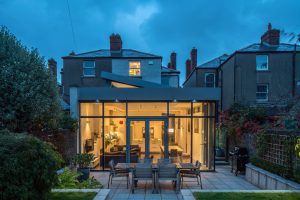 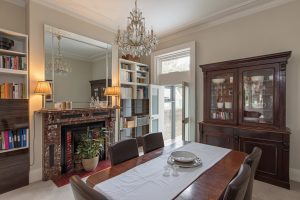 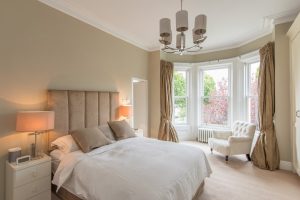 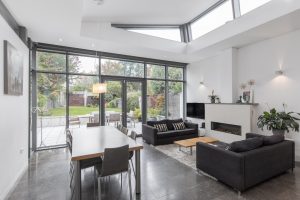 In 1911 the then recently built house at 45 Hollybrook Road in Clontarf was owned by 37-year-old George Freehill who, unusually for the time, listed his religion in the census as “none.

We can surmise that George was still at the GPO in 1916 when all hell broke loose, although on Easter Monday almost all of the staff were off. In either case George would not have been a happy keys clerk second level – his place of work remained a burned out shell until its restoration in the 1920s.

The house at 45 Hollybrook Road is a classic red-brick Edwardian of the sort which has attracted families in multitudes through the past 20 years, recession or not. Competition for homes has been particularly fierce in Clontarf with locals who grew up here always eager to get back in.

The Edwardian period was noted for particularly fine craftsmanship (arts and crafts were in their heyday) and the builders of the time in this area were solid on quality. The road which was constructed in the early 1900s was named not festively, but after the “Holy Brook” that ran close to the garda station nearby.

Perhaps the only problem with these houses has been the traditional small enclosed kitchens or else lean-to facilities added in the 20th century. For modern needs, the more expansive kitchen/diner which allows family breakfasts while seated and the entertainment of guests, has been lacking.

So when Tony Gray and his wife Dervela acquired the property in 2003 it was found in this original layout – albeit with three floors as built.

As they started a family the Grays decided to opt for a modern box kitchen extension of the sort that was becoming popular and they enlisted the help of architect Fintan Keenan, of Olga Keenan Architects, to undertake the job. It required the family to move out for six months as the extension was added and the rest of the house upgraded while still maintaining its original Edwardian features. The extension is linked to the older part of the house with marble steps. It is dual aspect and spans the width of the house while stretching to 45ft in length. A “lifted” roof allows more windows above to face into the sun and channel in the light. The space is divided into a kitchen, dining area and a living space which looks out across the garden.

The kitchen is Miele with integrated appliances and includes an Amanda American-style fridge freezer, a Falcon five-ring cooker and a standalone island unit with deep drawer space.

“The family has tended to live in this space by day time and in the evening we tend to move to the traditional reception rooms in the front,” says Tony, who is in the IT sector.

But the oldest of the couple’s three children is now in his teenage years and the modern space tends to become a gathering point for the family’s youngsters and their friends in the evenings, ensuring that the new space is used continuously. It has also proved useful for family events and entertaining. It brings the total floor space here to 2,690 sq ft – more than twice the floor space of an average city semi.

The extension means the Grays have had the best of both worlds. In the original part of the house is the hall and the original two interconnecting receptions – the living room and the dining room in period style.

The former has a bay window vantage point to the street and a fireplace with a white speckled with cream inset marble chimney piece. In the dining room, which has a door to the garden, the period marble chimney piece is in a mottled chocolate burgundy. Upstairs are a selection of ornate cast iron chimney pieces in many of the bedrooms.

There are three double rooms and two singles – we can presume one of the latter was assigned to servant Annie Casey.

Two bathrooms service four of the bedrooms while the main bedroom has its own en-suite shower room. Here, twin wash hand basins, an extra-large twin power shower and built-in polished timber cabinets are installed in what would have been a sixth bedroom back in the time of the Freehills.

There’s a side entrance and the rear garden has vehicular rear access – relieving the stress of parking often experienced on streets built before the car was common.

The rear garden is around 75ft in length with planted borders and a lawn. It is walled on either side and gets its sunlight on an east/south-easterly aspect. There’s a granite paved sunken patio for fair weather dining. The house is within a short walk of the Clontarf seafront which is located at the end of the road, according to the Grays, who are trading up to a bigger home in a new scheme in the area. Clontarf is a mile and a half from the GPO, which has been done up for a second time since the Rising and the focus of historical attention on its centenary.