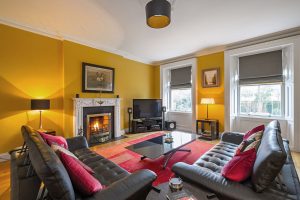 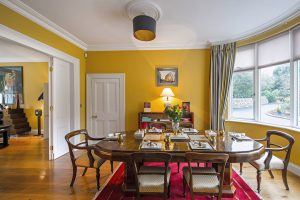 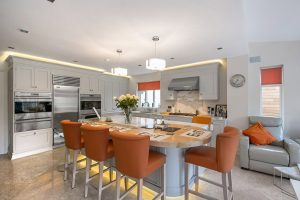 When it was home to international golfer Peter Townsend and his wife Lorna, Hillside was renamed by the couple – they called it, The Divot.

Presumably Peter, for many years the resident pro at Portmarnock, was ironic in the choice of name, because it doesn’t look as if he did any lasting damage to the immaculate lawns to the front and rear of his former home by gouging lumps of turf out of them.

Lorna Townsend was an Irish model who died tragically of a brain haemorrhage in her forties, and is remembered by those who knew and worked with her with much affection.

The couple’s children include jewellery designer, Chloe, whose Willow and Clo range is stocked in her flagship store in the Powerscourt Centre and in smart boutiques including Havana, Costume, and Maven in Dublin.

Her brothers, Dylan and Stuart, are both actors, the latter best known for his roles in Irish indie films such as Trojan Eddie and About Adam, and US productions including Queen of the Damned, as well as his on-off relationship with actress Charlize Theron. The couple appeared together in several films, including Head in the Clouds in 2004, the year she won the best actress Oscar for (the better known) Monster. They split up in 2010.

Stuart and his siblings grew up at Hillside. After their mother died, their father, Peter, sold The Divot, having first sectioned off a part of the large garden and built a second house. This is also in period style, and located to the right of Hillside as you face the house.

Townsend sold this second property some years later and moved to the UK.

Built in the middle of the 19th Century, and having now reverted to its original name, Hillside is a fine period house positioned above the village of Howth. The current owners purchased it almost a decade ago, paying more than €3m, and immediately set about a major refurbishment that cost upwards of €500,000 under the supervision of architect, Dermot Nolan, of Dixon McGaver Nolan.

This refurbishment included the replacement of the original windows with modern double-glazed replicas. The result is a period house in immaculate condition that, even on a soggy, freezing day in March, feels warm and cosy, testament to its impressive B3 energy rating. Now the current owners are moving to a different part of Dublin, and Hillside is back on the market.

The five-bedroom house has 3,488 sq ft of living space arranged over two floors, and stands behind electric gates on gardens of 0.6 acre. The ground floor has underfloor heating and four reception rooms, including a cinema room, as well as a serious kitchen installed by Design House Dalkey. It is a room for proper cooks, with Wolf ovens and Sub Zero fridges, a Quooker tap for boiling water and another for filtered still and sparkling water, and cabinetry that is both practical and tasteful, plus a large central island.

The ground floor also has handy ancillary space, including boot room, study, utility room and guest lavatory, and an inner hallway adjacent to the dining room that acts as a modern butler’s pantry. There are several built-in wine fridges.

Upstairs, there are five bedrooms, two of which are en suite, and a large family bathroom. The master bedroom has good quality fitted wardrobes in hand-crafted walnut in its walk-in dressing room.

Outside, there are well-planted gardens with a patio area and pond, and a zinc-roofed modern garage that also houses a home gym.

Howth is one of those villages that attracts fierce loyalty from its residents, most of whom would never dream of living elsewhere. Why would they, when Howth has all the elements one might need? There are primary schools in the village, and secondary schools down the road in Sutton.

The shopping is good, especially now there is a dedicated market seven days a week.

There’s the DART, and buses, with a route passing up Thormanby Road and a stop close to Dungriffin Road for those who find the climb up the hill from the village a little too challenging at the end of a long day.

Then there’s the famous Cliff Walk, ideal for blowing away the cobwebs on a Sunday, and another through the rhododendron gardens at the back of Deer Park, which is spectacular during the summer months.

Then of course there are the golf and sailing clubs, the annual Prawn Festival, which took place over the St. Patrick’s weekend, and enough bars and restaurants to cater for every dining preference.

The King Sitric is old-school Howth, with a focus on fish and seafood, and has a devoted following, while East, located in the King Sitric’s former wine cellar, is where Howth’s next generation of movers and shakers likes to kick back of an evening, and congratulate themselves on their good fortune to live in such a place at such a time.