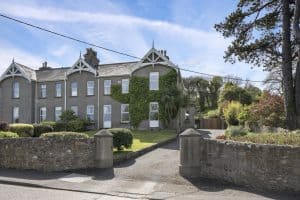 St Elmo is a house with all the advantages you’d expect from its Hill of Howth location. Memorable views, from first and second floor windows and from the gardens, are of Ireland’s Eye, Balscadden Bay, Howth Harbour and on to Portmarnock and Malahide.

The gardens, front and back, are a definite product of the location. Niftily climbing the hill, they have been well tended; the rear garden has an award-winning rockery, vegetable patch, cultivated berries of many kinds plus native plants and foliage galore. St Elmo is a five-minute walk to the old village of Howth. 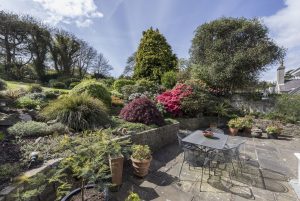 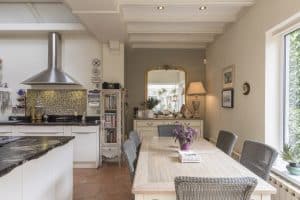 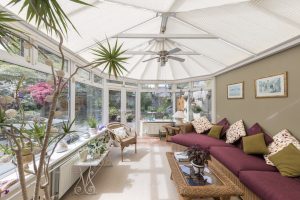 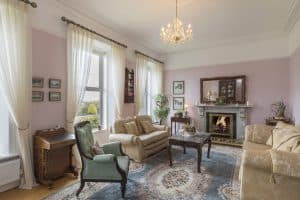 The reception hall is where the original style and purpose of the house is most evident. A room in its own right, it has original tiles, a long window and the glow of burnished, well turned wood in the curving banisters and ornate spindles, in polished doors and floors.

Vendors Dudley and Siobhan Hudson bought St Elmo in 1984, when they paid IR£92,000 (€116,816). It’s been a happy family home for the 33 years since and is, they assure, “ideal for children”. Dudley has cared for the gardens, Siobhan describes herself as a jam-maker.

They’ve put a lot of work into re-roofing, insulating and modernising St Elmo – an impressive new kitchen/breakfast/diningroom and conservatory gives a whole new meaning and way of living at the rear of the house.

The kitchen/breakfast/diningroom was added, with great care, in 2011. At its highest point the ceiling here is about 25ft; an existing false ceiling revealed the solid oak beams and a period skylight when it was opened up.

A hob fits into an original chimney breast and the entire space moves gently into the garden-facing conservatory.

A TV room/den at this part of the house has fifth bedroom potential and a sitting room, with windows to the front and side, has views as far as Portmarnock, Malahide and Donabate. A drawingroom has similar views, plus three sash windows, a polished wood floor and original marble fireplace.

A bedroom and family bathroom form a pleasant unit on the side return – the bathroom has a deep bath and separate shower.

The main bedroom faces front and, with the other three, is off the first floor landing. It has both light and views, a tiled en suite (originally a fifth bedroom) and high ceilings. Both other bedrooms have polished floorboards, picture and dado rails. The landing has a couple of fine traditional arches and, overhead, an original glazed and colour-trimmed window.