It costs €3.2m to buy the best view in Dublin and another €3m to build the biggest mansion the capital has seen in a generation, writes Mark Keenan. Longacre Baily, Howth, Co Dublin Asking price: €3.2m Agent: Gallagher Quigley (01) 8183000 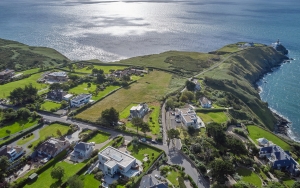 From the three-acre eagle’s nest clifftop site at Longacre in Howth, more than 140 feet above the sea, you look downhill at dusk over the postcard perfect Baily lighthouse, with its reliantly revolving beacon.

Next stop in your view line is Anglesea in Wales (on a clear day). There’s nothing between you and Wales but the lighthouse and its cottage.

Look to one side, right across Dublin Bay, and you see Killiney and Dalkey, the Sugar Loaf and on again to Wicklow Head, Ireland’s easternmost mainland point.Down behind you are the light, spires, towers and chimneys of Dublin city. 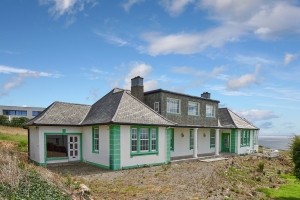 Below in the sea is the fascinating steady procession of lit ships of all hues in and out of Dublin Port, along with the sail-boats out for a jaunt, now and again some pods of dolphins and the occasional whale.

Turn to the other side and you’re looking at the craggy cliffs of Howth Head, sprinkled with sea birds, breaking waves below and above them the famous Howth Cliff Walk, which draws hundreds at weekends (Prince William and Kate Midleton asked to be taken here) to experience these sights. The walk passes the end of the garden at Longacre. Seven miles out in the sea flashes the beacon of the lonely Kish lighthouse.

This three-acre site and a 1920s bungalow has just been put on the market for €3.2m. Its estate agent, Conor Gallagher, claims this site holds the best view in Dublin bar none. The Baily lighthouse was automated in 1996.

What’s more, Gallagher asserts that it’s worth €6.2m to the right buyer. That’s the €3.2m for the site plus another estimated €3m to build Longacre House, the extraordinary clifftop home designed by architect David Leahy for which full permission has been obtained for this remarkable site.

Leahy, who has sketched up luxury homes for Madonna and Dolores O’Riordain among others, designed the part-subterranean Longacre House to span 13,000 sq ft of main accommodation with multiple courtyard gardens and terraces, a bar, gym, a cinema, sauna, a jacuzzi, a snooker room and a huge underground swimming pool party room. The house alone represents the equivalent indoor floor space of a cul-de-sac of 13 average-sized family houses.

There’s also a range of ancillary buildings and a secret clifftop hideout viewing room accessed via a hidden passage from the main residence.

The vendor is the software millionaire Ronan Rooney, who along with business partner John Hearne, sold their Curam software company to IBM in 2011 for a reported €152m. At that time of the deal, Irish property prices were at a record low.

Longacre today contains a single 1920s-built summer house, extended into the first floor in the 1970s. Formerly owned by the late Tom MacDonald, long time owner of the Big Tree pub in Dorset Street, it went to market in 2016 for €2.6m and was acquired by Rooney. 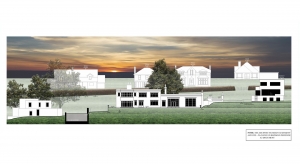 Two homes back on the road is the 9,000 sq ft Danes Hollow, constructed and extended by Riverdance duo John McColgan and Moya Doherty, also on just over three acres. When placed for sale in 2016 for €9.5m (it was bought by concern promoter Peter Aiken), McColgan said: “You would never get planning for something like that today. A site like Dane’s Hollow only comes up once in a lifetime.”

But John McColgan was wrong.

Rooney and his wife enlisted architect Leahy to draw up plans for this fantasy luxury clifftop villa located next door to the former home of Gay Byrne and Kathleen Watkins.

With “sheer persistence” and lengthy engagement with the planners, and following a slew of objections from neighbours including banker Mirja Wenski and the pilot Rick de Neve (husband of the Be Sweet chocolate company founder Bernice Moran),

An Bord Pleanala eventually gave the green light for what is one of the most spectacular homes Dublin has seen and likely its largest new build in a generation.

Now Rooney has thrown the cat among the pigeons by opting to sell the site on again, with the plans included. The long-time Clontarf resident has seen his adult children fly the family nest and settle nearby. The arrival of grandchildren has now persuaded the Rooneys to stay put.

It means that Dublin’s best view and the magnificent villa plans are now on the table for someone else to snap up.

As Dublin’s largest new home build, it is likely to be matched only by the 15,000-plus sq ft dwelling currently being built by Dermot Desmond at the site of the famous Walford at Shrewsbury Road. Walford sold for €58m in 2005 and still holds the title of Ireland’s most expensive home ever.

But with its complex of ancillary buildings, including a garage centre and an extensive garden pavilion spanning more than 2,000 sq ft in its own right, Longacre likely pokes its nose in front for covered floor space. Much will depend on the total covered space finished on each of the two sites.

In either case, Ireland’s largest new build home of the past two decades is the enormous 35,000 sq ft Martinstown mansion commenced in Limerick by JP McManus in 2005.

However, the selling agents do stress that a new owner at Longacre isn’t obliged to construct the home for which permission was granted, for which a construction bill of €3m is estimated. Anything smaller is bound to be positively considered by planners athough a new application will be required.

The current 1920s house was built to maximise sun in certain rooms and as a result, faces the wrong way for the best views.

The planned new home has much of its body sunken into the slope and undulates downwards in a series of divisions and courtyards, designed to minimise its impact on the landscape but also to build up tension as you pass through it from the front, before the spectacular reveal at the back where it opens right up to the sea.

Its design is a mix of classic and contemporary styles and incorporates a secret passage from the massive master bedroom suite to a hidden romantic clifftop perch viewing room.

Given its exposed position, it is also designed to protect and cocoon its owners and gardens in winter when the days are dark and the elements will batter an exposed seaside position.

Leahy’s designs are often inspired by the great historic houses of Ireland and Britain. “This home is designed to enable movement channels through big rooms without disturbing those rooms. You walk into a grand hall reception, a very grand space with a staircase flowing down into it, opening onto a side terrace area, then down into the intimacy of the internal house and down again to the big reveal – into the kitchen and family area and dining room and another family room, which all open out on to the sea. There are enclosed courtyard gardens and a huge pool room.”

This Howth home with home spa, cinema & swimming pool is on the market...