Perched on a dramatic cliff top location, ‘Tara Hall’ was the star in the closing scenes of ‘Love, Rosie’ 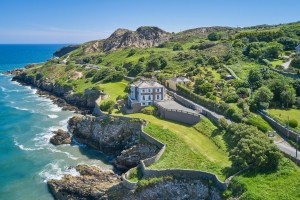 Rosie and Alex have always had eyes for one another. At Rosie’s 18th birthday party, they kiss for the first time. But Rosie has way too much to drink, gets her stomach pumped and doesn’t remember anything. So begins a world-famous Irish love story by Cecelia Ahern.

The next day, Rosie tells Alex she wished the previous night had never happened. Alex takes this to mean that she wants to remain platonic friends with him and nothing more. But he is wrong.

Thus the author establishes the disastrous misunderstanding on which her 2004 bestselling novel Where Rainbows End is based. The blockbuster novel was later made into the €25m grossing movie Love, Rosie starring Lily Collins and Sam Claflin. 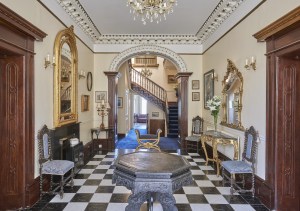 Our heroine, Rosie, dreams of owning a boutique hotel and goes to America to study hotel management and ends up with Greg. Meantime, Alex goes to Harvard, becomes a top surgeon and marries a supermodel (as you do).

But Rosie’s dreams do finally come true. In the big last scene, her knight in shining armour strides unexpectedly into the reception of her boutique hotel by the sea to book a room.

She pointedly asks if he has any baggage. Alex explains that he has none — he has just ditched his supermodel wife to come and get Rosie. 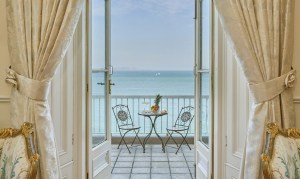 The passionate kiss that closes the film is framed by a window looking out over an azure sea at Balscadden Bay in Howth. The camera pans back through the window, out over the cliffs and the sea. As it goes we see Alex sweep Rosie up in his arms, Officer and Gentleman-style and we get a full view of the picturesque Regency house perched atop the low cliff face. Roll credits.

In its starring role as Rosie’s boutique hotel, Tara Hall and the drama of its setting steals the scene. And few can dispute that it’s a showstopper. The film critics seemed to agree. They slated the movie script but all asserted that the film looked amazing. 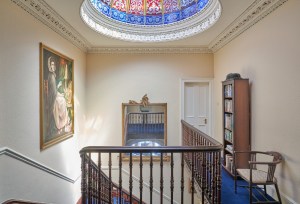 If, like director Christian Ditter, you happen to be searching for the ultimate setting for your big final kiss off, you’d do worse than embrace Tara Hall, the three storey Regency home on the cliffs at Howth, which has just been placed for sale for €5m.

In the film Ditter’s camera gets intimate with the regal entrance hall and its vibrant stained glass dome reflected back to us in a mirror. His lense also makes a calculated lunge for those eyewatering eagle’s nest window views out across Balscadden Bay.

Tara Hall (supposedly renamed after a past but now forgotten association with Margaret Mitchell, writer of Gone with the Wind), absolutely screams romance. Yeats lived next door as a teenager, later writing that he “[took] the glass out of [his bedroom] window, sash and all. A literary passion for the open air was to last me for a few years.” 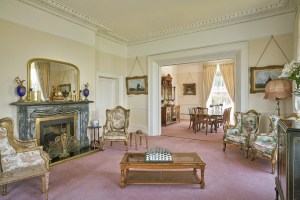 Less romantically, a stubby little Winston Churchill learned to swim in the bay here as a tyke, and in 1914 the Irish Volunteers landed their Asgard arms shipment within sight.

Although built in the 1820s as a weekend retreat for a wealthy city based family, there are boundary walls and ruins at the Tara Hall site which may date back to times when Howth got its own knight in shining armour.

Sir Almeric Tristram landed here and thrashed the Vikings, who were hitherto in charge, on St Lawrence’s Day in 1177. So Tristram changed his name to St Lawrence in tribute for his victory. The St Lawrence family later became the Earls of Howth.

Tara Hall stands out on Balscadden’s picturesque cliff road, which winds up from Howth Harbour and by virtue of this setting, it is possibly one of the best-known houses on Howth’s northern slopes. 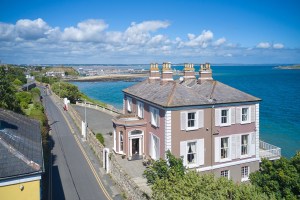 It spans three storeys with a total floor space of 6,500 square feet and a 300-metre-long cliff-top garden with sloped lawns and medieval era terraces.

Aviation specialist Eddie Barrett and his late wife Marjorie bought the house in the 1970s and raised their three children Elaine, Naomi and Christopher here while constantly restoring and improving the property. Before passing five years ago, Marjorie had made the house a familiar home to neighbours through the numerous charity fundraising events she hosted here.

Tara Hall’s views look straight out to Lambay Island and Ireland’s Eye. In the distance, the coastline diminishes away in the haze to the silhouettes of the mountains of Mourne. To the west, the coastal view is defined by North Dublin’s golden chain of estuaries and strands.

Closer in are the granite bulwarks of Howth’s East pier and a still bustling fishing harbour despite the latest blows from the EU to the sector.

To the east, it has an open vista across the Irish Sea and to the south is the heath-dusted outcrop of Kilrock, rising up to mark the end of Howth’s famous cliff walk.

The house’s Regency styling is a lot less formal than a Georgian’s, but with a symmetry that is somewhat more delicate and elegant. Each of the three floors has four principle rooms and each of these benefit from triple aspect viewing vantages. 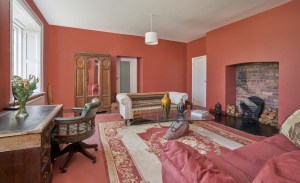 A lantern-style entrance porch takes you into that opulent central hall, off which the principal receptions are arrayed on either side.

Above this, at the top of the house, glows an enormous polychromatic dome of coloured stained glass which filters its various hues into the spaces below.

On the east side, a grand interconnecting drawing and dining room is Tara Hall’s real showstopper. These rooms form a proper entertainment suite, also with three-way views. 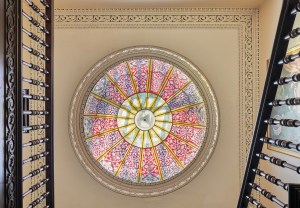 High ceilings feature some intricate stucco work and there’s a marble chimneypiece with French doors leading you to an elevated terrace that hangs out over the sea. The house retains all but one of its original chimneypieces.

The eastern rooms comprise a traditional kitchen with French-style touches and there’s a third reception, rich with period detailing, a carved stone chimney piece and, in this case, views over the islands.

These rooms are currently connected by a single doorway but could easily be extended into one another to make a very large, open plan kitchen/family room to rival the more formal suite across the hall. 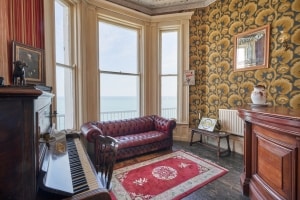 Behind the stairwell is a period style drinks room with a bar. The bone-fine mahogany staircase (up which Rosie leads Alex), brings us to the first floor and the four main bedrooms, each with elevated sea views in two directions, 200-year old doors, and sash windows. Each has its own en-suite.

One more bedroom occupies the upper floor of the northern bay, with dual access from the landing and the master bedroom on the western side. A new owner might think about making it into a larger master en-suite/dressing room space.

The lowest floor has another living room with high ceilings, a big open fireplace and two period windows overlooking the garden. This also has an adjoining wc and shower room. 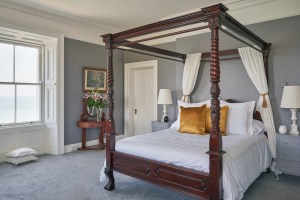 There’s a wide hall off which are located two more well-lit bedrooms. On the seaward side, a modern extension houses the last bedroom and another reception, both with large picture windows. 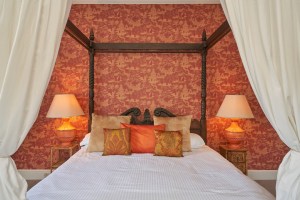 The cave cellars on this floor, originally hewn out from the rock, have myriad spaces ready for upgrading. These were formerly utility spaces and wine cellars. The outside lawns and terraces are encircled by the aforementioned ancient walls with lancet windows and arches. From these it’s a sheer drop to the rocks and waves crashing below.

The original owners built an artist’s contemplation cottage on the site right up against the sea and its four walled ruin is still here (more romance!). 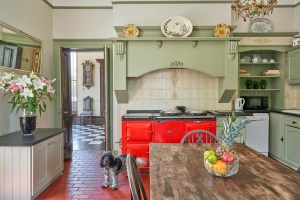 “We’d love if Tara Hall became a romantic boutique hotel so it can be enjoyed by everyone,” says Elaine Barrett. Gallagher Quigley is being assisted by Sherry FitzGerald/Christies International in this sale and their clients will kiss Tara Hall goodbye for €5m.

Sizeable and stylish Drumcondra Duplex for €725,000 has bespoke features including...

Back to Front in Malahide – the 1.55m Home Redesigned to Face the Sea
Scroll to top