You are here: Home1 / News2 / uncategorised3 / Dive into luxury Howth family home with coastal and castle views for €... 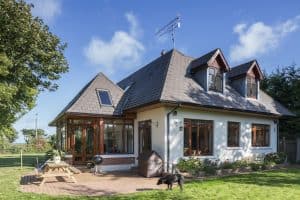 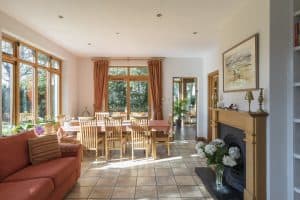 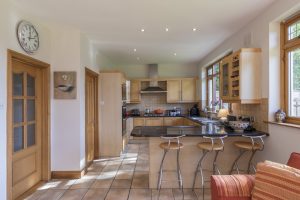 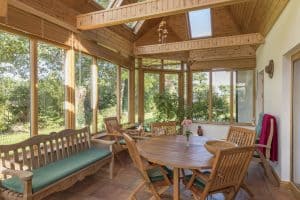 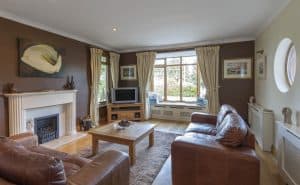 The lucky black lab that lives at Deerpark Lodge is a fortunate dog indeed, not least because each day he gets to walk on the Burrow and Claremont beaches – just a few minutes’ from his home, over Corr Bridge – meeting up with all his canine friends to shoot the breeze and run after a few balls.

When the tide is out, the beach stretches all the way from Howth Harbour to Cush Point at Sutton Golf Club, long enough to tire out the most rambunctious of dogs, but also a great amenity for sea swimmers and wind surfers.

The current owners are reluctantly downsizing now that their family is grown, but plan to stay in the area so that neither their own nor their dog’s lives are unduly disrupted.

Deerpark Lodge was built approximately twenty years ago, and is tucked away on a private site of approximately one-third of an acre surrounded by mature trees and bounded by an ivy-clad stone wall to the back.

The house feels as if it has been there for longer than it has, thanks in part to a classic design rather than one that speaks too loudly of the decade in which it was constructed, but also to the views of Corr Castle from the rooms at the back of the house.

The kitchen, sun room and two back bedrooms all have views over this small castle which was built as a gate-lodge adjunct to the larger Howth Castle, home to the St. Lawrence Family. Corr Castle dates from the 15th century and was probably built on higher ground in order to guard the isthmus at Sutton. It passed to the St Lawrence family in the mid-16th century and was used as a grandstand for the Howth races set up by the 30th Lord of Howth. The circuit ran from behind Howth Castle to just beyond Corr Castle.

Deerpark Lodge is located on the edge of the Howth Castle and Deer Park Demesne, almost exactly at the half-way point between Howth and Sutton Cross. It is, in fact, officially the first house in Howth, as next door’s address is in Sutton.

The house is a one-off original design, built to the current owners’ specifications, with a large open front driveway with plenty of off-street parking, side and rear gardens with south and westerly aspects, a slate roof with an extended canopy, and a master bedroom balcony with views towards Burrow Beach.

Deerpark Lodge has 2,750 sq ft of living accommodation, and the internal spaces – the hallways and landings – are more generous than is customary in many newer houses. The upstairs landing, for instance, is large enough that it could make a fine home-office with views towards the sea – effectively another room, although not described as such.

The ground floor entrance hall is similarly spacious, with a guest lavatory, cloakroom and dedicated laundry space with direct access to the outside, handy for when the urge to dry the washing in the sea breeze is too strong to resist.

The main living room lies to the front of the house, and has an open fireplace and a wide, square bay window overlooking the garden, with unexpected glimpses of the sea through the pines.

Double doors lead from here to the single storey sun lounge along the west side of the house, which is clad in warm timber and, in turn, links into the large open-plan kitchen/dining/living space spanning the south-facing rear of the house. This is clearly the heart of the home, with a coal-effect gas fire adding to the homely ambience. A cosy sitting room off the hall is used as a television room.

Upstairs, there are four double bedrooms. The master suite has fitted wardrobes and a walk-in wardrobe, and an en suite shower room; there is also a family bathroom.

Outside, the gardens are well-planted and laid mainly in lawn, with plenty of room for all the outdoor paraphernalia that every young family requires, as well as the potential to install raised beds and grow some vegetables. Prospective purchasers will be pleased to hear that the house has a new boiler for gas-fired central heating, and double-glazed windows to keep things cosy.

Transport links are good, with the bus route passing right outside and two DART stations within easy reach. There is good shopping in both Howth and Sutton Cross, and Howth in particular has a wide range of bars and restaurants – there’s a focus on seafood, and the annual Prawn Festival is a highlight – as well as a farmers’ market. Sailing and golf are the two major sporting (and social) activities in the area, but there is also an active tennis club.

New home view: Putt down roots on the green
Scroll to top