You are here: Home1 / News2 / featured3 / Chronicles of Carmel: Step Through This Howth Home’s Ordinary Front... 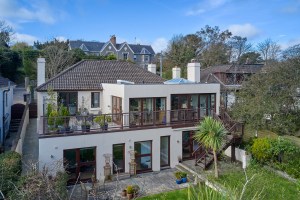 The origins are exotic even if the reality isn’t. The urban bungalow, widely built in Ireland from the 1930s to the 1950s, has its genesis in the low-slung colonial Bangala (meaning ‘of Bengal’) homes of the Indian Raj.

Retired colonial civil servants took the notion back to Blighty, and in the home counties where they first built them, the broad vowels of posh pronunciation had soon morphed the Bangala into ‘bungalow’.

Despite the subcontinental pedigree, the reality was a solid and convenient middle-class home with a somewhat bland reputation. Today, they’re mostly situated in desirable and established locations. But mid-century bungalows are notoriously tough to reimagine, with most renovators taking the obvious route by going up into those expansive attics.

With the benefit of a slope out back, Dubliners Billy and Caroline Keran transformed Carmel, their 1950s former bungalow at Balkill Road on the Hill of Howth, by going down and out. 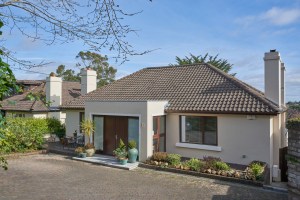 The childhood sweethearts left Ireland in the 80s to carve out careers in Britain. Billy, as a quantity surveyor with a family building background, worked on big ticket schemes like Canary Wharf. Art-trained Caroline went into graphic design for advertising and later became an interior designer. They returned in 2004 looking for a home in their old coastal north-county stomping ground.

“We saw Carmel and we instantly liked it,” Caroline says. “It had great atmosphere and because we both worked in property-related businesses, we knew right from the start what we could do with it.”

Carmel was however a bit different. Along with the others in its cluster at Balkill Road, it is believed to have been a holiday home for Irish Army officers. Built on the slope of hilly Howth and in a time when cars were taking over from horses, provisions were made for both at Carmel, with a garage and a tack room tucked in underneath the house.

“At that time, the Summit tram passed through at the back and holidaying soldiers could hop on from their gardens,” Caroline says. When the Kerans arrived, the tack room had been converted into a downstairs bedroom.

Caroline opened her Wow! House interiors consultancy and a shop at Harbour Road in Howth Village and Billy went to work for lead firms like John Paul Construction among others. Their combined professional nous meant that, unlike most couples, the story of their mega-home renovation has no glitches nor challenges to surmount whatsoever. Everything went swimmingly.

“We sketched out what we wanted and then we called in Traynor O’Toole architects to make it all happen. Don Lee was brilliant, especially with the planning end of things.” 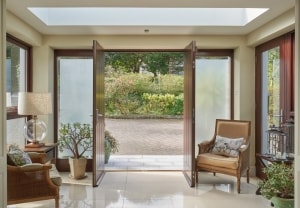 With the downward rear slope in their favour, the Kerans extended downwards and outwards in a project which would keep the original front largely intact, but would totally transform the rear. It took nine months. The end result is a home with a surprising twin persona that is twice as big as the original. From the front, it looks like a modest bungalow; at the back, it’s a decked-up contemporary villa.

“We installed a lot of skylights. The house has natural daylight wherever you go and it’s always warm because Billy has insulated it within an inch of its life.” At the back, they installed a raised deck above the rear garden for summer dining and entertaining.

“As an interior designer, I like colour and I like quirky. I’m a believer in art-led design with key furniture pieces making an impact,” Caroline says. As Billy set out on his own as a quantity surveyor, Caroline’s consultancy grew to the extent that she had to close her shop two years ago. 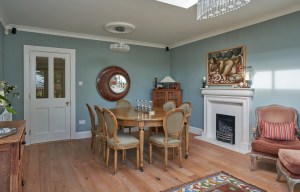 As an interior designer, she is best known for her extensive European supply network, which can source a much wider selection of pieces whether new or vintage. “Ireland is still very restricted in choice when it comes to interiors,” she adds.

Stylish muted timber floors and bright marbles, along with light, space and clever use of tone and colour, mean Carmel is as cool and exotic as anything in its subcontinental gene pool.

Now with their son flown the nest, the couple have their eye on a cottage project nearby to “right size”. At 2,970 sq ft, Carmel has been placed on the market through Gallagher Quigley for €1.2m. 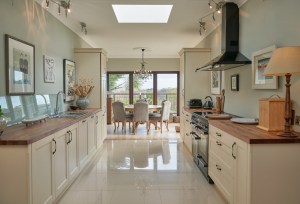 The only alteration to the original frontage is a modern porch with generous double doors and a skylight overhead, which lights up a high-impact reflective cream-tiled hall. There’s a living room, a family room and a kitchen/dining/living space, an entertainment room and a shower room.

Downstairs, both the master bedroom and second bedroom have ensuites and walk-in wardrobes. All four are doubles. And if new owners want even more space, that vast attic is still untouched. A three storey bungalow anyone?