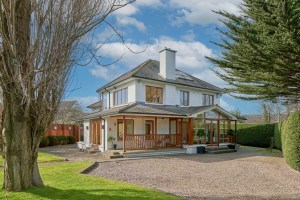 When Bernard and Emer Hensey moved into Emer’s childhood home in Malahide, Co Dublin, the house improbably faced away from the sea. This in a location famous for its maritime views. So the couple decided it was time for a complete turn around.

Today you can see the sea from the first floor of Cum-a-Ciste in Malahide (named after a Co Kerry townland), but it wasn’t always the case. This detached four-bedroom house on a third of an acre originally faced in exactly the opposite direction with its back to the Malahide Estuary vistas which are such a selling point here today. 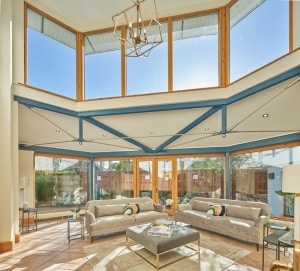 The 3,200 sq ft four-bed family house was built in the 1950s. But it was literally turned back to front by Bernard and Emer when they renovated it in 1998.

“It took a lot of work to get the aspect to face the sun,” explains Bernard. “It’s not a traditional front and back garden set-up. The house is located at the back of the site with the garden to the front and the front door of the building was originally at the back.” 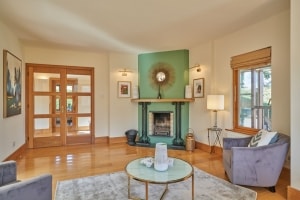 It was re-designed by architect Chris Ryan and barely resembles the original structure. “We did sometimes wonder whether we should have just knocked the old house down,” says Emer. “In the end we just kept a few of the existing walls.”

The renovation took almost two years in total. Not only did they change the aspect of the building, they added another floor, had a pitch roof installed and gutted the interior. The result is a spacious, airy family home which is full of light.

It’s fitting that the house now looks seawards as both Bernard and Emer are passionate sailors and it was through sailing in their teens that they first met. Bernard from Sutton was 16 and Emer, living at Cum-a-Ciste, was 14. They remained friends and went on to marry at the ages of 30 and 28. They have three children — Patrick, Ella and Finn. But the family lived abroad, first in Shanghai, and now Seattle, because of Bernard’s job with Boeing, the US aircraft manufacturer. 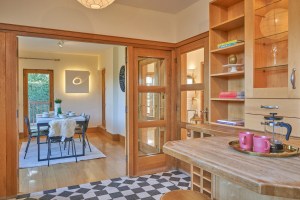 “We never meant to stay away so long,” says Emer. “We were actually on our way back to Ireland from Shanghai when we stopped in Seattle and Bernard was offered a job.” They’ve been there for 10 years now.

Throughout this time they’ve held on to the house and it’s easy to see why. The property is accessed from Sea Road, via electric wooden gates which open on to a gravel driveway that leads to the front of the building. This has an American-style verandah with a porch and glazed windows. The verandah faces north-east towards the sea and gets the sun in the morning. 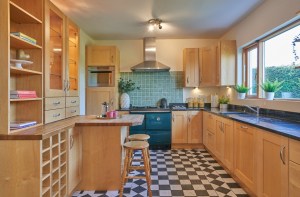 The house has solid oak flooring throughout. A heavy oak staircase, which took 10 men to install, connects the ground level to the first floor. Wood features heavily too in the kitchen, which has solid timber units with an extended counter top with high stools. There’s also a turquoise Stanley stove. 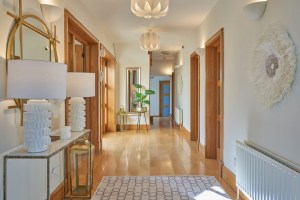 The sitting room is at the front and overlooks the garden, which still retains some old trees. Here, the eye is drawn to an open fireplace flanked by an unusual wrought iron mantelpiece, specifically designed for the room. The sunroom with its high split-level ceiling and big windows is located at the back of the house and filled with light in the late afternoon and evening. It opens onto a patio which can be used to entertain.

Each downstairs room has double doors which, when opened, give the impression of one big room. “It’s a real party house,” adds Emer. “We’ve held many christenings, first communions and parties there.”

The top floor attic, which extends the breadth of the house, has balcony Velux windows. The family have used it as an office and a TV room. “On a good day, you can see as far as Lambay Island,” says Bernard. “When the children were young we used it as a little haven to escape to,” says Emer. 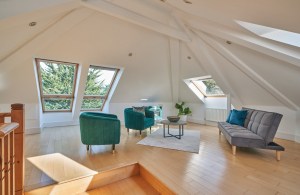 Patrick and Ella are at university now, and Finn, their youngest, is still in school.

So they intend to remain in Seattle for the time being. “We like living here,” says Bernard. “We have a lot of friends, some American and some Irish.” 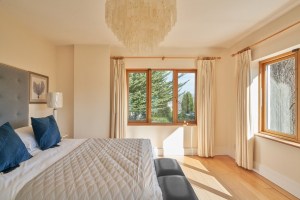 They still return to Malahide to visit family and friends from time to time. “But we’re coming to the stage in our lives when we want to downsize,” says Emer.

They’re contemplating buying a smaller house in Dublin. “I’m very sorry to sell it,” says Emer. “I grew up in that house and it means a lot to me. The kids too are sad to be selling it. 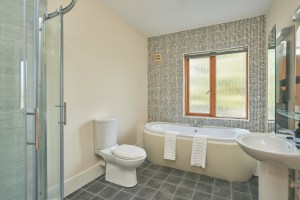 Hopefully it will go to the right people, and they’ll appreciate it too.”

Stealing the scene in Howth – Inside the €5m mansion featured in blockbuster...

Period Property with lots of Character in Fairview, D3
Scroll to top